Lady Kara tied her slave with his hands behind his back and she also tied a leash on his head. She then had fun pulling him around and even kicking him in the balls. She trampled his balls besides just kicking them and whipped his bare back painfully. She enjoyed his cries of pain and the more he cried the more it egged her on and she tortured him till she got tired.

Mistress Gaia and her friend did not like how this guy spoke to them. They took him to the backroom of their store and they beat him up. The mistresses kicked him in the balls using their high heels. He tried to beg for mercy promising he would never do that but they did not care. They did not even care that he was a customer. No one was allowed to talk to them like he did.

Lady Kara ballbusts slave for messing up her project

Lady Kara found out that her slave had messed up her project and she was mad. She taped him and left only his balls. She sat on his stomach and hoisted his legs up. She then slapped his nuts and his cock as painfully as she could manage. She also did it with her legs as she kicked him hard and cruelly. She made him cry and scream like a little girl.

Mistress Gaia does not care who someone is. This guy was in a wheelchair and he still got tortured by the mistresses. Mistress Gaia and her friend brought him in and they kicked him in the nuts as he sat in his wheelchair. They did not care that he was disabled. He had a penis and nuts and those were the ones the mistresses were interested in crushing and they did.

Mistress tortures slave for being drunk

This mistress could not believe what had happened to her slave. He was drunk and she had forbidden him from showing up in her house drunk. He seemed to have forgotten what she had told him so it was up to her to remind him and she did. She did it cruelly and forced him to undress. She then kicked him in the nuts and made sure he would never forget again.

Mistresses gang up on slave and crush his balls

Mistress Gaia and her friends wanted to teach their slaves cruel lessons. So they all went to each other's house and they beat up the slaves together. The mistresses started at mistress Gaia's house where they kicked the naked slave in the balls. They also crushed his cock and tortured him like never before. They kicked him with their high heels in order to make it more painful. Then they went to the next mistress' house.

Mistress Misia caught this guy stalking her. She tried to tell him to get something else to do and to stop following her around but he did not stop. She was pissed but instead of going to the authorities to report it, she took matters into her own hands. She lured him to her house and when he came, she kicked him in the balls and she tortured him to make him stop. He stopped. 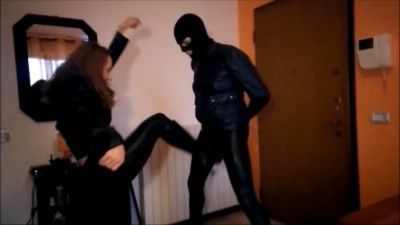 Mistress kicks slave in the nuts

When it comes to cruel punishments, this mistress is one of the best at giving them. She wanted to punish her slave for being rude so she chose ballbusting. She loves hot ball busting slaves and losers because she does not need to do it repeatedly for it to be effective. Once is enough for her. She kicked her slave and he cried and begged for mercy. She let him go knowing he had learned his lesson.

This mistress loves to do crazy and nasty things. That is the kind of person she is. Today the mistress wanted to beat up this guy for lying to her. She took him to her house where she kicked him in the balls. She had removed her skirt so he thought something was about to go down. As he was fixated on her sexy ass and her nice body, he was kicked in the balls.

Lady Karame was out on a picnic with her husband when she learned that he had done drugs and he was useless to talk to. She kicked him in the balls and in the nuts and although she knew he would not really feel the pain immediately, she ballbusted him as hard as she could so that he would feel it when the drugs wore off his body later in the day or the next day.